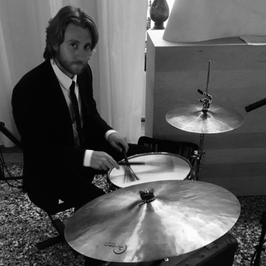 David started drumming at a very young age and learned early on to play along with songs on pots, pans, bed pillows and books before starting lessons aged 7. Later he studied at the University of Southampton, receiving a BA in 2008, and later an MMus in music performance from Kingston University in 2009. Having had tutoring from drummers as diverse as jazz legend Martin France (Django Bates, Elvis Costello, Dave Holland) and highly creative percussionist Pete Flood (Bellowhead), David has gone on to perform in a wide range of musical genres and has performed at venues and festivals across Europe such as the North Sea Jazz Festival, Montreux Jazz Festival, the Royal Albert Hall, The Four Seasons, The Ned and many others.