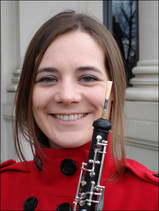 Holly Randall read Music at Cambridge University before completing Postgraduate studies at the Royal Academy of Music and the Conservatoire de Musique de Genève. In 2005 she won the Barbirolli International Oboe Competition and subsequently gave a solo recital at the Wigmore Hall. From 2006 until 2011 she was a member of the Orchestra of the Zürich Opera. She has played with most of the UK's major symphony orchestras and since 2014 has been a member of the Bournemouth Symphony Orchestra. She has given masterclasses at the Dartington International Summer School and has coached young musicians from the Purcell School of Music and the National Youth Orchestra of Catalunya.