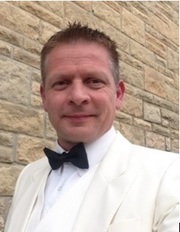 Kevin was brought up within a musical family and started to learn the Trumpet and piano from an early age.  Having played in concert and brass bands for a number of years he decided to join the Army as a musician at the age of 16.  During training he decided to change his musical path and learn the Clarinet and within 2 years reached Grade 8.  During 25 years of service Kevin has performed all over the world and served his country in 2 military campaigns.  His most prestigious achievement was winning a competition to compose a march for the Sultan of Oman and was invited to hear it performed at his 35th National Day Military Parade.  Having completed formal Diplomas in performance and band direction, he left the forces in 2009.  Kevin is presently teaching music in schools in the Dorset area and plays saxophone and keyboards in a pop duo.  Kevin went back to his brass roots in 2013 when he became the Musical Director of Weymouth Concert Brass.  Composing and arranging new music is something that Kevin enjoys in his spare time and hopes that his 4 year old son will follow in his footsteps.